This is a two-parter again. Part I: The Spectre of Fascism.

The next substantive essay in the Winter, 1939 Volume of Partisan Review  is a second letter from Paris by Sean Niall (Sherry Mangan): it was written in the late autumn of 1938 and it, along with the letter from Leon Trotsky that ends the volume, conveys the tension of those months  opening on to the start of the War.   You might recall from his “Paris Letter” written in the late summer of  the same year that he was 34 at the time. He was a long-time Trotskyist activist in North and South America, closely tied to the Fourth International, as well as working for those sources of regular pay checks for men such as Dwight Macdonald and other PR writers — at Time, Fortune, and Life magazines.

He opens with a look at the art world in Paris in late 1938 –against the background of the Munich agreement with the signature of French Prime Minister, Édouard Daladier — on the  Munich Agreement of September 30, 1938. The French galleries are hesitant to put on new shows:  ” Paris’s autumn season has proved to be a rickety child, timid, cranky, and ready at the least alarm to give up the ghost entirely. The galleries will still plan no more than one show in advance; publishers’ lists are, to put it politely, not exactly world-shaking; and as for really striking novelties on the concert-programmes, they can practically be counted on the fingers of one thumb.”

He goes on to foreground the political and cultural crisis at hand: It is the “spectre,”  not of Communism,but of Fascism, that is haunting  France: “To a pedestrian meditating on, say, the new establishment in France of concentration- camps for “undesirable foreigners,” the sight of the Greco-vegetarian figure of  Raymond Duncan, suddenly sandal-flapping from his preposterous “Akademia” in the rue de Seine, seems literally a sheer hallucination.” 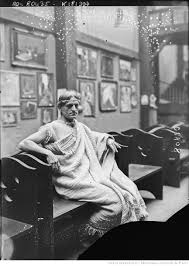 In his political/artistic critique, Niall addresses the journal Beaux-Art, a directory of what was going on in the arts. But now, late in 1938, it has taken on a programme for a ‘truly’ national art, meaning a return to academic painting, and an art “purified of cubism, surrealism, abstractionism, and everything else of interest that has occurred since impressionism.”  This is much like the approach of the pre-Nazi German art world. He goes on to link this reactionary move within art with racism: “the latest report from Pere Lachaise Cemetery is that, sure enough, some racial puritan has repeated the castration of the figure on the Epstein tomb of Oscar Wilde.”   Niall explains this general atmosphere  is that the cultural world “is haunted by the jittery feeling that someone or something called war or fascism is constantly looking over its shoulder when it works,” but he finds as well that people haven’t drawn the right conclusions from what this all means: it is is the result of the ongoing betrayals of the Communist Party’s participation in the political and social life of Europe, including stealing Trotsky’s archive of papers, the assassinations of  Ignace Reiss and Rudolf Klement, and the death of Leon Sedov — all Trotskyists.

The decay of the internal life of the Soviet Union has also had a pernicious effect on the left of centre writers and activists within France. Romain Rolland  left the CP with the Moscow Trials,  but now appears to cling to aspects of popular frontism that offer liberal rather than revolutionary prospects.

Niall is a straightforward confident explicator of the complexity of the Left and because of that he is able to flavour his expositions with humour and irony. So, for example, he describes the various literary-political movements and groupings as the “flesh-pots (or rather ink-) pots of literary Stalinism in a country where literary movements live usually an amoeba-like life of perpetual self-divisions and fusions, unamoeba-like enough, however in the violence of diatribe that usually attends them.”

Here Niall turns to the elements of this period that suggest moves forward within the cultural struggle: he is pleased that Andre Breton has criticised the British group of Surrealists for wanting to withdraw from the art battles into “the cozy ambience of surrealist success and Popular Front  High-life”.  Niall applauds Breton for seeing the necessity, at time, to educate its troops when they wander off.  And not to spare exclusion if required.

Next week: Part II:  The Ways Forward, in which Niall discusses the work of the FIARI