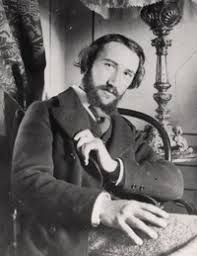 And far from Florida, the next piece in Partisan Review, Vol.6, No. 2, Winter 1939 are a few pages from André Gide’s Journal, which are reflective, analytical, in places lyrical, yet overall, somewhat anodyne. An earlier post on this blog, “But we shall not turn our face from you, O glorious and grieving Russia”, posted on December 17, 2016 gives an overview of Gide’s life, work,and politics, and might serve as an introduction to the present article if you don’t know much about him.

We know that the American critic, Fred Jameson, asked the question, “Why doesn’t anyone read Gide anymore?”, and that in 1965, twenty years before Jameson, so did Paul de Man, in a review of new books on Gide in the New York Review of Books:

“It has almost become a commonplace of today’s criticism to state that André Gide’s work had begun to fade away even before the author’s death in 1951. Compared to Proust, to Valéry, to Claudel, and, outside France, to Henry James, Joyce, and Thomas Mann, he seems hardly to be part of the contemporary literary consciousness. An easy contrast can be drawn between the relative indifference that now surrounds his work and the passionate intensity with which the generation of Europeans born before 1920 used to follow his every word, considering his private opinions a matter of general concern. During the Thirties, he was without doubt the most public literary figure in France, much more so than Malraux, Camus, and Sartre, for all their overt political activity, ever were.”

The same things might be said again in 2018; that Gide, though a prolific writer, a Nobel Prize winner, a man who wrote openly about his sexual life, and a writer who took politics seriously, if not quite coherently, has slipped away from the canon of modernism. One obvious reason for this is that as a life long intellectual he was always in dialogue with the ideas around him, and always reflecting on their interconnections, and therefore chameleon-like in his preferences. The “Pages from a Journal,” published in PR after a summer and autumn of advancing Nazism, anti-Semitism, and, in the Soviet Union, political trials and executions, are a compendium of things Gide was thinking about at that time.

He opens with the reflection that “Early in life I put myself on guard against beliefs I owed to habits encouraged by my parents, to my protestant upbringing,  and even to my country”. He says that it took him a long time to understand that his concerns were born from his position in class society. He sees that his sympathy for the poor and the labouring classes arose only because he was bourgeois: that is, of his ‘critical survey’ of the world around him, “I knew well enough that had I been less privileged I could not have taken it”.  And for that reason, he could see that the revolutionary ideas come from the privileged classes, and are then taken up by the working class and its allies.

Having been compared to Rousseau,  Gide now writes that Rousseau’s idea that “men are naturally good’ is absolutely wrong.  “This utopian view of the past dangerously falsifies every project, every prediction of the future.”  So he counterpoises to it the Marxist concept of  humanity as always being in the process of becoming… there isn’t an a priori, idealist ‘goodness’ in us; rather, everything is made, toiled towards, going on. Natural law may exist and that law may be immutable; but “there is nothing that man creates, there is nothing human which cannot be changed — beginning (or rather, ending) with itself.”

From this Marxist concept, Gide goes on to look at Lenin’s statement, in his unfinished The State and Revolution that “Until now, there has not been a single revolution which, everything considered has not resulted in the strengthening of administrative machinery of the State. And what is the USSR today? The dreaded bureaucracy, the administrative machinery has never been stronger.

Just as Gide pitted himself against the bourgeois mores and concepts of his parents, now he  frees himself from the degenerated Stalinist State, returning to a place not that different from Thomas Mann’s.  Free from his Marxist discipline over three years, Gide learns that his freedom is the richer for those years.

The rest of the pages are romantic, somber, suffused with his sense of aging. He was 70 when this was published and he speaks frankly of his physical frailties. These pages are moving to read, and they offer a reason  why no one reads Gide anymore.  He writes his funerary speech himself. He faces his desire to mix heaven and hell and find a reconciliation, but insists it can’t be done.

To read the full text, copy and paste the address below into your search engine.