HIs letter begins with the Parc Monceau, which had originally been built in the 1780s as a series of garden arrangements, which displayed small versions of follies and amusements and which drew those ‘fairy duchesses’,  who have been called home to the US to try and earn their own pay through the WPA —  Franklin Roosevelt’s New Deal form of state employment during the Depression–  and which gave jobs to over 8 million people between 1935 and 1943. This is a period of the American- Parisian romance with its Duchesses, now ‘tearfully ruined,’ along with those ‘sensitive well-dressed young men, their unfinished novels still unfinished, [who] have sailed home to America to help in Dad’s business.’

But it is the remainers (ah…..as most of us still are now in London in 2018) and the Bohemians and the artists who still maintain that special sense of Paris that even now clings to the edges of metropolitan America — and Nina Hamnet, the girl from Wales who came to be known as the “Queen of Bohemia,” 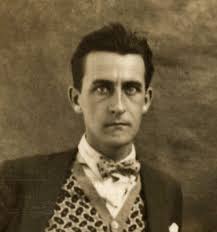 standing up to Robert McAlmon  in a late night Paris argument, by finding him “too intellectual.” They were both part of the 1920s Paris scene.

“Of four practising poets taken at random, one binds books, one proofreads, one lectures, one draws cartoons – and everybody writes articles…the bogus Bohemia based on monthly allowances, duly wept, sung, and only half regretted, has in its turn passed into history, its place taken by a sterner quotidian reality productive in French artists of a remarkably intense, if not always soundly Marxian, pre-occupation with economics and politics.” And he surprises us, not entirely, “Paris is the pleasanter for it.”

Having created the scene — Mangan turns to the current political situation in Paris. The atmosphere is tense and the world of Stalinist trials and executions is taking place right in front of him. Rudolf Klement, who was on the Secretariat of the Fourth Interational has been kidnapped in the centre of Paris by the G.P.U. of the Soviet Union — its State Political Directorate — — Klement has been decapitated and thrown into the Seine.

You might remember that in the first post about Partisan Review Vol.VI, No1,  we looked at the announcement of the founding of IFIRA –The International Federation of Independent  Revolutionary Artists — by Andre Breton and Diego Rivera with some support from Leon Trotsky.  And now, from France, Mangan says that the increasing betrayal of Communist principles by Stalin has resulted in a significant number of French artists joining the anti-Stalinist artists’ federation.

From here he goes on to look at the fortunes of various ex-Communists in Paris. Gide, you may recall from an earlier post {December 25, 2016:“But we shall not turn our face from you, O glorious and grieving Russia”} broke with Communism in 1936. Romain Rolland, after the Czech crisis of 1938 throws off his Communist sympathies in  “a sensational defection from the ranks of the Third International’s literary fellow-travellers, for years its most respectable and revered apologist in international cultural circles.” He broke with the  war-policy of “collective security.” That is, Stalin wanted an international alliance of the Soviet Union with Great Britain and France, which led many to leave the CP, as this approach set aside revolutionary principles.   Mangan writes that given the extent of Rolland’s “moral influence, it is to be supposed that his example will be followed by many French artists.”

Mangan points out, though, that some artists think that Gide was just looking for a way of burnishing his revolutionary credentials by  abandoning the Communists. He offers a poem by Benjamin Peret. 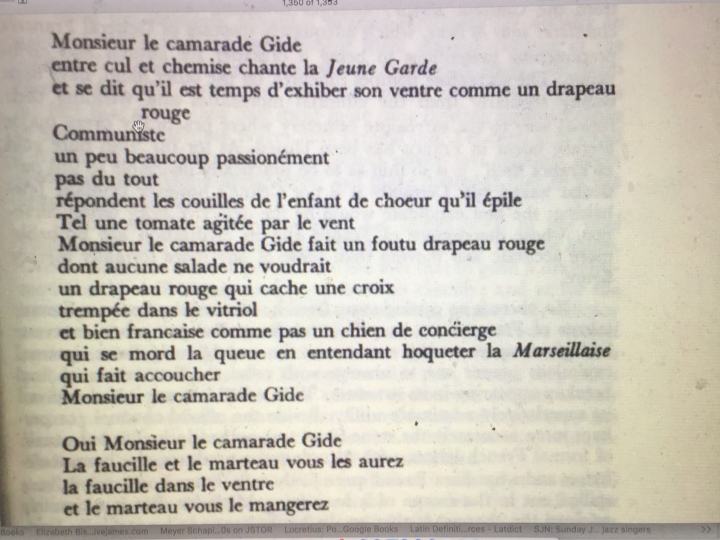 “Not at all”  reply the balls of the choirboy,

No arse would want a red flag hiding  a cross

and as French as no  janitor’s dog

licking its balls  to the sound of  the Marseillaise

who shits out Monsieur Comrade Gide

You shall feel the hammer and the sickle

the sickle in your belly and

the hammer in your gob.

Mangan concedes… “This is perhaps a little hard on Gide.”  He goes on to skewer the Surrealists, “The  Surrealist pomp funebres have been issuing regularly from the editorial mortuaries and wending their way to the surrealist cemetery where practically every major literary talent in France has been buried”.  But, he goes on, “just when everybody had given up  expecting ever to see the end of Surrealism, internal explosions permit one to observe with relief the first cracks of breakup appear in its structure.”

There are other witty put-downs, and from his position as a bona fide Fourth Internationalist, Mangan demonstrates his political acuity, his literary taste, and his broader sense of humour.  Go read it for yourself.  Can’t imagine a better “Letter from Paris” to read in this terrible Winter of 1938-1939, when a good dose of anarchic wit is just the thing before the anticipated troubles of the coming war. It is in Vol VI. No.1, Fall, 1938  Sean Niall. Letter from Paris. “Sean Niall”– Sherry Mangan

Next Week, and on time, Mary McCarthy again!

Many thanks to Edwin Collard, for cruxes uncruxed.