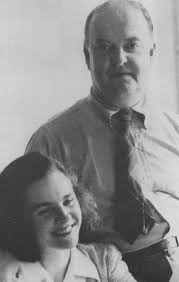 If you have been reading here for a while, you know that the marriage of Edmund Wilson to Mary McCarthy in 1938 lasted long enough, was complex enough, and tempestuous enough to keep people talking about it over the decades. And they were writing about it as, in the later 1980s, when the great stream of narrative books about the people and politics of Partisan became a summer reading holiday for those who still had cottages in Amagansett, or who were students at Columbia and were readying themselves for their futures. Not least, young women trying to find out if it was going to be Sontag or McCarthy who would be a decent model for an intellectual life.

James Atlas offered a list of these books in 1985, in an article in the New York Times:“The surest sign of any group’s demise is the appearance of memoirs, and the New York intellectuals have been busy writing theirs: Lionel Abel’s ”The Intellectual Follies,” William Phillips’s ”A Partisan View,” Irving Howe’s ”A Margin of Hope” and William Barrett’s ”The Truants” have appeared in the last three years( 1982-1985)”. Atlas quotes Morris Dickstein: ”The definition of a New York intellectual is to think he’s the last one,” and I would think that Atlas thinks that of himself, with his recent history of himself,  along with others of my generation, including Louis Menand (though not in NY — though NY is, we know, a state of mind) — anyway, the marriage of McCarthy and Wilson is one of the central social events among the NYI, or as we called them at home, the JIs — Jewish intellectuals, though neither Wilson or McCarthy was jewish, ‘either by birth or osmosis’ as Irving Howe had defined a characteristic of the New York Intellectual.

Which is to say that the Wilson-McCarthy marriage brought high literary, high cultural, and high art criteria in to the PR office on 17th street.  Which isn’t to say that Wilson, educated at the Hill School and then at Princeton, friend and patron of F.Scott Fitzgerald, wasn’t  part of the 1930s interest in the Soviet Union, Socialism, Communism, and as a critic reader, Marx and Engels.  Though he was older than Rahv and McDonald and the rest, they welcomed him to their office, and asked him to write for the PR, while Mary McCarthy, as Frances Kiernan writes, ‘[for] this occasion Mary McCarthy wore her best black dress and carried a silver fox stole— a costume “more suited to a wedding reception,” she would later recall. As it happens a drunken dinner with Wilson and a few others, and what should have been a casual affair, became McCarthy’s awkward agreement to marry him.  She also later said that she thought that if she slept with him, she had to marry him.“So finally I agreed to marry Wilson as my punishment for having gone to bed with him— this was certainly part of the truth. As a modern girl, I might not have called that a “sin”; I thought in logical rather than religious terms. The logic of having slept with Wilson compelled the sequence of marriage if that was what he wanted. Otherwise my action would have no consistency; in other words, no meaning. I could not accept the fact that I had slept with this fat, puffing man for no reason, simply because I was drunk. No, it had to make sense. Marrying him, though against my inclinations, made it make sense.”

You might recall as well, that she was deeply involved with the man who she later wrote was the only one who she truly loved, Philip Rahv.

Now, Wilson was very interested in Marx and Freud and if you look back , you can read his wonderful essay on “Flaubert’s Politics,” which featured in the first issue of PR. The essay here, “The Myth of the Marxist Dialectic,” is a chapter from Wilson’s highly regarded history of ideas of socialism and communism, To the Finland Station, which would be published in 1940. William Philips writes a response to it, which immediately follows in this issue of PR, and he takes a rather severe approach to Wilson’s argument. {I have to say that I find William Philips’s writing to be hard-going and at times gratingly insistent}.  But Wilson’s galaxy was close to but not the same as that of PR, and there is little evidence that his growing reputation as a literary critic and intellectual was tarnished by his discussion.

Wilson begins by looking at the history of the idea of a dialectic in philosophy, principly the Hegelian dialectic, in which a thesis is a stated position, its antithesis is ‘a process of splitting of from the thesis, and negating it; the third is a new unification, which reconciles the antithesis with the thesis and is known as the synthesis.. . the synthesis is always an advance over the thesis, for it combines in a ‘higher’ unification the best features of both the thesis and the antithesis’. Hegel makes the argument through a discussion of the changes inherent in the movement from the Roman Republic to the Roman Empire.

This is what Marx and Engels take into thinking about the future, rather than an analysis of the past: they have the thesis as   bourgeois society, the antithesis as the proletariat, and as synthesis, the Communist society. So, as Marx argued, what he and Engels did was to take Hegel’s categories and turn them ‘right-side up,’ that is, to understand ideas as the product of human making, “ALL IDEAS WERE HUMAN,” and every ‘idea was bound up with some specific social situation, which had been produced in the first instance, in turn, by man’s relation to specific material conditions.”

Wilson’s criticism of the ‘dialectic’ is that for Marx, no less than for Hegel, this dialectic is itself idealist. But only insofar as the ideas that humans make are themselves generated by material life.  Wilson’s targets are what today we call “reductionists”, collapsing the dialectical framework to the more structural one of base/superstructure, in which all those things which are not part of the basic apparatus of economic life are reduced to being offshoots of that base. Wilson argues that Marx and Engels didn’t ever really get round to discussing seriously those elements of superstructure: religions, ideologies, psychic life, etc. because they had enough to do right at hand.

But a problem for Marx and Engels was the status of their analysis as ‘science’. Was ‘science’ an element of the superstructure or was it an objective discourse? In the 21st century ‘science’ is more awkwardly theorised that it was at the end of the 19th and the first half of the 20th centuries.  Wilson writes: “Natural science then, is not to be numbered among the ideological outgrowths of the super­stucture, but has a precision of which they are incapable; and this precision social science may share.”   Can the ‘dialectic’ of marxism really be admitted as a ‘science?’  Some of the attempts in the 20th century to hold on to that argument have had to resort to re-making it as a structure instead, linked to psychoanalysis, another theory in trouble. Or simply holding on to the ‘science’ part of ‘social science,’ without much of an audience or a rationale. Wilson thinks that if they had only stayed away from trying to ‘scientise’ the dialectic, they would have avoided what ends up looking like a form of ‘mysticism’ or “a religious myth, disencumbered of divine personality and tied up with the history of mankind.”

2 thoughts on “Edmund Wilson on “The Myth of the Marxist Dialectic” Vol. 6, No.1”

THE POET BY DAY