So far, if you have been a reader of this blog, you will have heard much about Trotsky, and some about Stalin, but you haven’t heard anything about James Burnham or the Socialist Workers Party USA– it doesn’t seem that our Partisans spent that much time in the Trotskyist political parties. Dwight McDonald was a member for a while, Dupee stayed with the Stalinists through the Moscow Trials, others watched and waited, and made their Modernism their politics.  The history of the factions and sub-factions and groupings of the Trotskyist movement is probably the focus of other blogs, but one of the founding members of the American Socialist Workers Party, James Burnham, turns up now in these summer months and takes up the discussion of Thomas Mann initiated earlier in 1938 by William Troy. 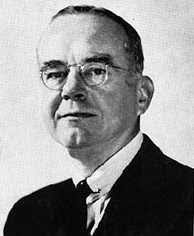 James Burnham was another boy from Chicago, excited by and studying the philosophical currents of the 1930s. He came from an upper middle class background, his British father had been an executive of the Burlington Railroad, and James Burnham went to Princeton and to Oxford before joining the faculty at New York University. He mixed with New York Society, and Alan Wald writes that he would “attend political committee meetings in a tuxedo because he had just come from or was en route to cocktails at the Rockefellers or the home of some other wealthy family with whom he was friends.”

became a member of the William Buckley National Review conservative grouping.  The American SWP was founded at the end of 1937, and the Secretariat of the SWP was made up of Max Shachtman, James Cannon, and James Burnham. I knew Burnham’s name that way, and not much about him except that he was involved in the  factionalism that divided the SWP, by 1940, between Max Shactman and James Burnham on one side,  and James Cannon on the other.

Burnham may have been a toff, and an academic, but he was a dedicated SWP theorist and writer who had no trouble turning from academic conventions to political ones. And he had also spent time as a co-editor of the journal Symposium, which had aimed to address cultural questions within a political context…. When the SWP split in 1940, Burnham’s position was that the Soviet Union should not be supported in the war; that it has become a ‘degenerated workers’ state’.   WIKIPEDIA: ” In political theory, a degenerated workers’ state is a socialist state in which direct working class control of production has given way to control by a bureaucratic clique. The term was developed by Leon Trotsky in The Revolution Betrayed and in other works.  In May 1940, he resigned from the SWP, along with Shachtman and their supporters. He went on, in the War,  to work for the propaganda section of the Office of Strategic Services, forerunner of the CIA…

Now, back to 1938 and Burnham on Troy on Mann. Burnham takes on the method used by Troy by arguing that Troy’s use of ‘myth’ as the organising structure of analysis threatens to overtake and in fact, suggests that it is the ONLY method for analysis.  To use this idea, an anthropological one, “as alone legitimate is to be guilty of the usual and perennial Platonic fallacy of hypostatizing a method into an Absolute.”  His criticism arises from within the Trotskyist convention of ‘altering the question’ that we have looked at in an earlier post: Are we  simply unable to learn that the legitimacy of any method  is decided by the problems we are trying to solve, the purposes to which we hold, and the efficacy of the method in handling the  subject-matters in relation to those problems and  purposes?”

The argument that Troy makes may be true, and certainly works,  Burnhan writes, but there are equally coherent and persuasive ones that can be brought to bear through the methods developed in psychoanalysis and  sociology.  His inference is that the difference between offering a set of coherent analyses along different ‘Absolutes’ is that between interpretation that reiterates the same point, and analyses that begin with the questions that need to be asked now.  It is a shot across the bow at Troy’s system, and it is a reminder of the urgency of the political and cultural questions of the moment at hand.

Even more troublesome, Burnham argues that Troy’s ‘myth’ isn’t only an ‘Absolute’; its an irresponsible one, disconnected from reality because, as Troy argues it, it exists in the realm of the pure imagination:

“Chucked overboard is all centuries-assembled baggage of laboratory and telescope, of carefully elaborated and ever-revised hypotheses, of plans rationally analysed and predictions precisely made and verified, of theories called ever to account, publicly before the eyes of all who wish to see, by the marshalled evidence. From this Troy beckons us once more to  re-baptizing it as Myth — the dark religion of the blood.”

I love this piece… whatever Burnham turned into later on, he hits pay dirt with the links he sets up and he re-opens the discussion of Mann for Partisan Review’s anti-Stalinist politics and for the journal’s readers.

And then he goes on to surely actualise the context:  “It was in the midst of Mann’s American lecture tour that there took place the third and foulest of the Moscow trials. As he nightly summoned his audiences to join him in aspiration toward Democracy and Truth, not one word of protest, not one suggestion came from him against history’s most degraded and perverted assault on democracy and truth.

A good vindication of Partisan Review’s aesthetics and a good opening for more discussion of Thomas Mann.