Here is Saturday’s post on Friday — going away for weekend.

NOTE: The two-part article by William Troy, “Thomas Mann: Myth and Reason” which follows Luxemberg’s “Letters from Prison,” will be the subject of a blog post here later in the autumn, and will include responses to Troy at the time from other PR contributors.

But seeing how it is still August here, and the slim volume of Partisan Review Vol 5, No.1 is drenched in anxiety about the state of things in the summer of 1938,  it seems right to move on to the next PR document from that June:  poems by ‘Two English Poets,’ Julian Symons and D.S. Savage. 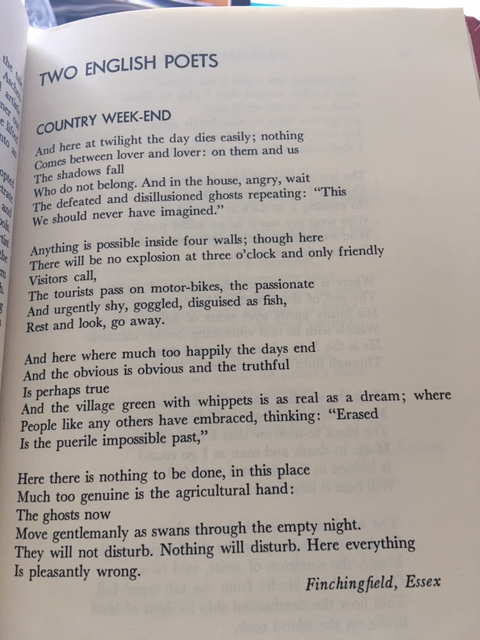 Julian Symons, was the editor of the English, Twentieth Century Verse, which he founded in 1937; he was known to the Partisan Review also  as a supporter of  Trotsky.  D.S. Savage  (who figured in an earlier post on this blog, May 17, 2017–see archive) was published by Symons, and in Partisan Review.

Neither Symons nor Savage were part of the public school wing of 1930s political poetics; in fact, neither of them had been educated for their roles as poets or as conscientious objectors. And both were rejected for that status during World War II.

Symons left school at 14, and, as he said on Desert Island Discs in 1982, “I was, what I believe is now horrifically known as an ‘autodidact.'”  Symons says as well that he published young poets who were outside the circle of ‘Oxford Poets,’ one of whom was D.S. Savage.  The “Country Weekend” is filled with the atmosphere of tension that Symons lived– between the literary and the self-taught — the farmer and the guest,  and with the news of Fascism.  And not long afterwards, Symons and Roy Fuller watched and heard the first bombing raids in London. Symons returned to the period in his 1960 study, The Thirties.

Savage married in 1938, and when the volume was published, he and his wife  moved to a village near Cambridge, where, Alison Olson wrote in a 2007 obituary of Savage, the couple lived in a condemned cottage without water, light or sanitation in Dry Drayton, Cambridgeshire.

Savage  remained a pacifist, and in 1940 he was taken to a tribunal on that account.  He was ridiculed as a coward, but he felt that war was a manner of ” legalised murder”. In 1944, he moved to Bromsash Hertforshire, where the family — they had six children — lived in a pacifist market-gardening village. Savage was committed to simple living, Anglicanism, and Pacifism.

In 1947, Savage discovered the pleasures of Cornwall and the literary-artistic community around St.Ives.  The family moved to Mevagissey, and he became friends with the poet W.S. Graham, Nessie Dunsmuir, and also knew the painter,Roger Hilton.  The Savages  lived  in the  Heligan Woods, continuing his decision to live a life of poverty. They went without  running water, and had no oven. Savage took the family dinners to be cooked in the Village Oven, part of a long-time community ritual.  He did move from the Heligan Woods into the Village after two years and lived there until his death in 2007.

Savage is known to many as a  literary critic, who wrote The Withered Branch against the Modernist Novel in the 1950s. But in 1938, he was beginning a life of asceticism, piety, pacifism, and poetry.

You hear Auden’s influence  here, but so many poets were that it doesn’t make much sense to criticise them for looking to such a model. And for Savage,  “My central idea is the necessary unity of poetry, religion and politics in integrity. Politics needs to be ethically grounded and pacifism is the ethical ground of political action.”

Julian Symons, you may know, was an acclaimed mystery writer after the war;

Savage, with his roots in the countryside, became the author of  books about farming and living a simple life.

I haven't been able to find a photo of Savage. If you have one, would you send me a copy?