Delmore Schwartz: "Philip Rahv thinks that in The Trial it is death itself which is the justice — unfathomable or irrational — which has come for Joseph K." (Diary, 1951). 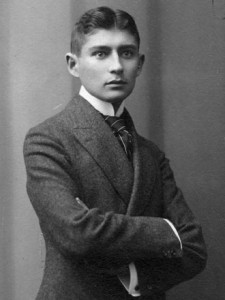 In the first issue of Partisan Review is a review by F.W. Dupee, of Kafka's The Trial, translated by Willa and Edwin Muir, and published  by the prestigious New York firm of  Alfred A. Knopf in 1937.  And from then on, Kafka became something of a presiding spirit over the imaginary persona of the Partisan Review. Starting with Dupee's  review, between 1937 and 1944,  PR published an essay on Kafka in 1938 by Max Brod, his biographer; between 1939 and 1942, three Kafka short stories; in 1944, "Kafka: A Re-evaluation," by Hannah Arendt; and in 1946, a section from Kafka's diaries.   And there were many more discussions about Kafka through the next four decades of Partisan Review. Arendt looks for what makes Kafka so modern:

"All his admirers …are struck  by something new in his art of story-telling, a quality of modernity which appears nowhere else with the same  intensity and unequivocalness. … " And she goes on to make a case for his simple style as a form of modernism:'Without in any way changing the German Language, he stripped it of its involved constructions until it became clear and simple like everyday speech purified of slang and negligence."

It was also the case that the  NY Intellectuals wanted their journal to show not only America on the verge of great change, but also a connection to and  yearning for their European connections and origins.  Franz Kafka was Jewish, troubled, and a 'problem' to his father. He died in 1924 at 41 of tuberculosis, with a fairly small oeuvre and a voice that moves between the 'fabulous and the familiar,' as Dupee described it, creating a sense of uncertainty and ambiguity common to both German Expressionism and Modernism.   And what people knew in the late 1930s about Kafka's life and opinions came from his life-long friend, confidant, and executor of his estate, Max Brod.  They met at University when Kafka was 19, and stayed close for the rest of Kafka's life.

Brod introduces the reader to Kafka through the newish technique of psychoanalysis, quoting sections  of a 100 page long “Letter to my Father,” that Kafka told Brod he had sent to his mother to be given to his intimidating father.  Mrs. Kafka returned it, and the apparent guilelessness with which Kafka heaps, almost indifferently, both praise and blame on his father,  shapes the reader's understanding so that we can't help but judge Kafka as a man who is either unbelievably naïve to the point of obliviousness,  or at best intended to be so hostile, that the two would never be able to find a way to a workable father-son relationship. But Brod suggests also Kafka’s self-understanding was more nuanced than Freud’s theories could explain:  "For one thing Franz Kafka was thoroughly familiar with these theories and never regarded them as anything more than a very approximate, rough picture of things. He found that they did not do justice to details or, what is more, to the essence of the conflict."

Like a lot of us, Kafka found his father's parental strength and authority to be both a model and a rebuke. Never good enough, never strong enough, never masculine enough to meet his father's standards (as he arranged them in his head), the letter to his father presents Kafka's fears and hostility in the form of praise, submission, and guilt. Its hard to read and it invites our own rebukes and worse, pity. Brod's own analysis of this is pretty thin:"Must he not have known that between characters so diverse as himself and his father an intimate relationship was simply impossible?" 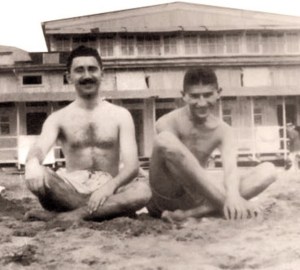 Max Brod and Kafka on the Beach

Brod makes a interesting link between Proust and Kafka,  linking their 'infantilism' to the  family scene. He goes on to list some of their shared qualities: "Their special precision in description, their love of detail, their meticulousness; the obsession of both with the family circle, a similarity of their racial make-up and even in their outwards lives…"  Brod's conclusion is to then match Kafka and Kleist's infantilism.. Kafka, he says, "read Kleist's  letters with special sympathy, underlined passages telling how Kleist's family regarded the poet as 'an utterly useless member of human society, unworthy of further consideration."   Kleist and Kafka,"both describe with the clearest, simplest, most definite words they can possibly find, the most secret, dark and unresolvable things."

One of the things that attracted PR to European Intellectuals like Chiarmonte and Camus was that those men had been strong active partisans in the struggles against fascism before the United States entered the theatre of war;  but there was also this other intruiging pulse of the wars between two generations of Jewish men in Europe and the USA, between the old Hebraism and the re-styled themes of lostness, alienation, and wandering across the Atlantic, which was almost already a nostalgia for  young jewish intellectuals such as Delmore and Henry, my father, who kept his copies of first American editions of Kafka's works in brown paper  butcher's wrapping over the original covers and held onto them until he died at 93.   As for Jewish daughters and their fathers….well, that's for another day.

Here is the link  to the article: