Delmore Schwartz, who remains the patron poet maudit, and who has served as the 20th and 21st century (so far) accursed poet of mind and heart of the New York Jewish Intellectuals, began his career as the witty, lyrical, and astonishing new talent of Partisan Review’s Vol 4, No.1’s own new character and agenda in December, 1937.  His story, “In dreams begin responsibilities” his first publication with PR, was the first piece in the issue: its combination of avant-garde form, psychoanalytic content, movie technics, and the 1930s  Jewish-generation-gap was a brilliant beginning for the man who ended up as the mourned-for “Delmore”, who all lovers of, and writers about, call by his first name, as if he truly stands beside us. John Ashbery called him “Delmore, as everyone called him, including those who didn’t know him.”  Elizabeth Hardwick, after Delmore’s death wrote that ”Delmore, ”as it was natural to everyone, acquainted or not, to call him because of his own delight in the pretty challenge of his first name,” softened his own shame at his being called such an aspirational name, decided on by his mother, aspiring, it seemed, to the condition of a restaurant.

(see this blog’s post, Oct 16, 2016 for more on Delmore’s ‘In dreams begin responsibilities’). Saul Bellow, John Berryman, Lou Reed, made him a ‘poet’s poet’ as well, a voice who is generalised as the sound of a poetic world not known before.

In his second publication for PR Volume 4, No.2, January, 1938, Delmore offered a subtle poem, “The Ballad of the Children of the Czar”, (see this blog’s post for more on ‘the Children of the Czar” and John Berryman’s ‘The Ball Poem.’ December 31, 2016). In Volume 4, No.3, in a collective ‘Little Anthology,’ Delmore contributes ‘Someone, is harshly coughing as before,” a poem anticipating war, which has Audenesque and Yeatsian echoes in it, and he reviews Wallace Stevens’s The Man with the Blue Guitar, and Other Poems and shows himself as a serious critical reader of his contemporaries’ work. (see this blog’s post on 25 March, 2017 for more discussion of Delmore’s review of Stevens– and some other remarks.)

And here in Volume IV, No. 6,  May, 1938, PR publishes Delmore’s,  “The Statues,” a fable that combines comedy and poignancy with a dash of Lucretian physics.  He dedicated the story to Meyer Schapiro, who would become a long-standing friend. I haven’t been able to learn from any of the usual suspects – either human or written – what in particular might have inspired this dedication, but it is certain that the two had been good friends and when Schwartz died, Meyer Schapiro wrote an elegy for him, published in The New York Review of Books,  September 8, 1966. Many critics and admirers of Schwartz cite the final quatrain of the poem as capturing the doubleness of Delmore’s  poetic range. Here is Schapiro’s poem:

“He lived in torment with imagined threats,
Spinning a thread of hostile signs,
Brooding on friends as secret enemies
And seeking among indifferent minds a friend.

Silenced was Delmore’s joyous wit,
His bright good sense and irony
Recounting the folly of worldliness
And the blind ways of ambition and success.

He who was restless without company
Has died in naked loneliness,
Convulsed in a dark corridor outside his door
Where crumpled papers crowd the floor.

He knew himself as fated to despair
And traced from birth a black destiny.
His name, his people, his sad time
Composed the burden of his poetry.

It has the beauty of his honest thought,
Of gravest musings on the human state,
On thwarted dreams and forced deformities
And ever-resurgent hopes of light”.

It was those  ‘ever-resurgent hopes of light’ that provided Delmore’s readers with reasons to love him, and to love his ideas about poetry.  Like Trilling, Schapiro was grounded in his life as an academic and is still thought of as one of the most brilliant scholars in Art History. It makes sense to me that Meyer may have been thinking of “The Statues” when he wrote this elegy, because the poetic-story is a proto-magical realist evocation of how the imagination can turn whatever it perceives into harbingers of an altered world of light.

The story takes place on a December day in New York City, as the ‘Faber’ –maker- Gottschalk the dentist is walking to work, work he hates because of the intimacy it requires with the insides of a patient’s mouth. he inoculates himself each morning with  a whiskey and soda — he is a nebish of New York. Jewish, sad, becoming leaden in his life. A sudden and random thick snowstorm overnight has created a sublime — frightening and beautiful at once — landscape in which the flakes, like Lucretius’s concilia of atoms, fall into shapes that lend themselves to the eye as “curious and unmistakable designs.”

The narrator, “a reporter on one of the Metropolitan newspapers,” is told to go out and create comic human interest stories among the astounded pedestrians.”Very soon, however, I found there was nothing whimsical or comical about the attitudes of the populace, but that they were, on the contrary, seriously moved. And that was by going about and interviewing people in this way that I met Faber Gottschalk.”

The whole city is touched and moved by this fantasy world of snow shapes, and when the Mayor says he will immediately call for the snow to be removed, this promise…”provided the first instance of the unanimity and intensity of feeling of the whole city toward the statues”.    They protest, but “Faber Gottschalk went further; he attempted to visit the Mayor at City Hall, astonished at himself, unable to understand his passionate concern about the snow’s statues, but determined to do nothing all day but walk about and regard them, cancelling all his appointments in order to do so.”

Gottshalk goes home and listens to the radio, still amazed by his feelings for these snow statues. He thinks back over his life and recalls how he really wanted to be a major league baseball player.  It had been his uncle who had “pointed out to him that as a dentist he would have a modest income and would be able to attend the various sports which absorbed his attention throughout the year. His uncle had been right.  . . . Faber Gottschalk was not able to explain to himself by this examination of his past life the reason for his emotion about the statues.”

The next week the population is oddly changed by the statues; police stop harassing picket lines; people become more focussed and precise; but everyone pauses and looks at the shapes. Not that they were all beautiful.  But in places, “The shapes had the plumpness and rotundity of great white clouds, the solidity and stillness of fine buildings, or indeed of a snow crystal.”

Read the rest of the story — there are some twists in it —  but its deep Lucretian grounding is unmistakeable, as the Mathematician suggests, as you will read.

Paste link below into your browser to get the feeling-meanings of this fable. I am surprised it hasn’t been reprinted more often.

Throughout Delmore’s work, the possibilities of light and some kind of pure cold — not the austere sublime of mountains but the welcoming one of snowflakes, keep appearing… the “heavy bear” is answered by the “Ease, warm, light, the utter showing,/When in the white bed all things are made,”  Here is another one: 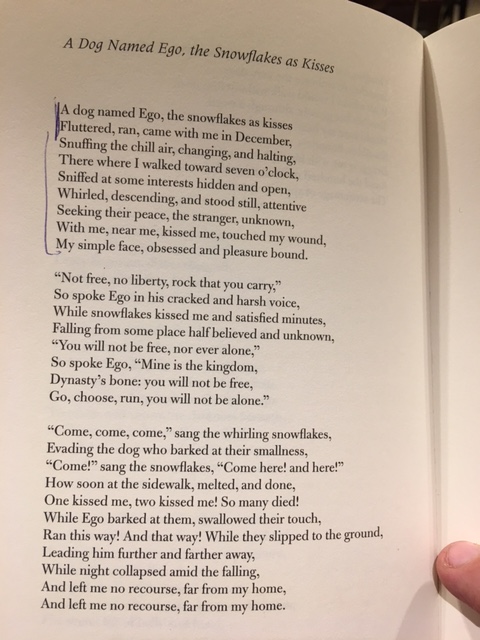 One thought on “Delmore Schwartz, “The Statues,”and a few others.”