It is a season of tragedy here in London, what with the Grenfell Tower human-made disaster and the Brexit idiocy and like shock waves from outer space, the Trumphypocracy.   And it was close to one in havering New York in 1938 as well, as you will know from the pages of Partisan Review, but silly seasons there must be, and since this is my post before taking next weekend off from the internetted world, I am turning here to Herbert Solow’s Riposte at the end of Vol.4, issue 5, 1938.

Solow, who was a serious diner at the top table as a Jewish intellectual, was also amusing and was one of the Luce Empire’s employees, along with Dwight Macdonald. This piece, “Substitution, at Left tackle: Hemingway for Dos Passos,” shares the Riposte pages with Macdonald’s “Time’s Fifteenth,” – while Macdonald’s peppery discussion of Time magazine’s fifteenth anniversary is also a pretty incisive analysis of its politics,  Solow’s is an attack more focussed on Communist Party literary criticism, in which ‘play by play’ excerpts from the New Masses show the fall and rise of Dos Passos and Hemingway according to the fortunes of Stalinism and its campaign against Trotsky.

As a developing Marxist and thinking about it in relation to questions of Judaism, Solow became an anti-Zionist, which he wrote about with rigor and which created a  large pothole on  the road of the Menorah Journal.  Solow had stood up for Sidney Hook’s questioning of how the Zionists proposed to deal with the human rights of the Palestinian Arabs.  Alan Wald, again, writes “Solow then and later defended Hook, for whom the episode marked Solow’s beginning as a “member of the permanent opposition.”

When the Moscow Trials  and the exile and persecution of Trotsky got underway, Solow and Dwight Macdonald were involved in the Committee to Defend Leon Trotsky. After the War, Solow stayed on with Fortune Magazine, left Marxist and Trotskyist politics behind, and died in 1964.

I didn’t know much about Solow before reading about him in Alan Wald’s book on the New York Intellectuals, I am surprised that I had heard never heard about him when I was growing up, though by that time he had distanced himself  from the PR  and Trotskyist world.

SO…in his RIPOSTE,  Solow shows us the way the CPUSA  has gone from adoring DosPassos to hating him and how Hemingway has travelled, in the minds of the Stalinists from a bourgeois ‘type’ to a “writer of uncommon merit”.  Here it is: its amusing and scarily true: (you can make the picture larger with your  view menu, I believe.) 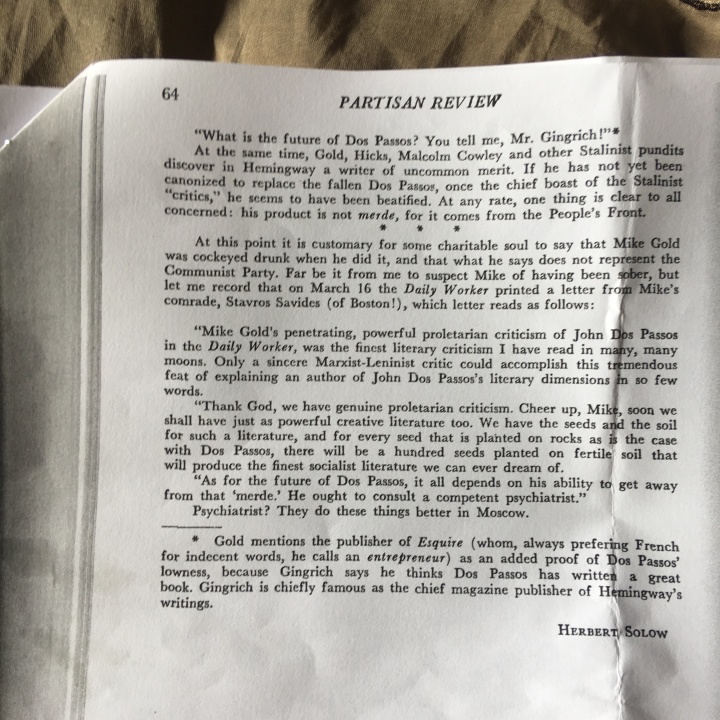 SO dear comrades. I am having a bit of time off….and will be back with you on 8 July, unless I can’t stay away from Delmore Schwartz’s “The Statues.”