The third issue of  Partisan Review, Vol 4, No.3, February, 1938  brings back Edmund Wilson. As an elder literary statesman, Wilson had agreed, urged by Dwight Mcdonald, to contribute an article to the first issue, and in it (Flaubert’s Politics –see discussion of it on this blog) he proved that Flaubert was an anti-Stalinist Marxist avant la lettre and of Marx’s party without knowing it. Wilson had published a version of it in 1932 in the Herald Tribune Book Review, and for PR No.3,  he offered “The Last Phase of Henry James,” also noted as “from a longer study of Henry James.”

As you may remember from the earlier post, Mary McCarthy broke with Philip Rahv, and married Wilson 10 February, 1938. Wilson’s Henry James piece was, as I see it, a way of addressing some of the concerns of PR —  recent history in the Soviet Union, the stance of the journal’s regard for High Culture Modernism– and of the American situation in the Depression.

Wilson had been a thorough reader and advocate of Marxism for some time, and Louis Menand,  in his 2005 New Yorker essay, “MISSIONARY: Edmund Wilson and American culture,” quotes from Wilson’s historicist/Marxist dedication to his Princeton mentor,Christian Gauss, on the publication of Axel’s Castle in 1931:that book would be “A history of man’s ideas and imaginings in the setting of the conditions which have shaped them.”

To readers today, Wilson’s claims about James’s Americans may appear obvious, but they were the seed-ground for the importance of James to Partisan Review over the next three decades. Some of the most prominent literary critics of the twentieth century wrote essays about James that appeared in  PR and other liberal literary journals:   Lionel Trilling, Alfred Kazin, Irving Howe,  and Philip Rahv coaxed from James’s works a combination of insight and blindness that characterised much of the work of historical and New Critical work in the 1940s and 1950s.

Wilson argues that “the Americans in James’s last novels bring something to Europe that it didn’t have” in many of the earlier novels: “It has always been the American characters who who have gotten the better of it from the moral point of view.”  Of the sad and marvellous The Ambassadors, “What if  Lambert Strether  had missed in Woolett, Mass., many things that he would have enjoyed in Paris: he brought to Paris something it did not have.”  So, he writes,  ” It is the American who finally dominates in Henry James”.

Wilson establishes James’s credentials as an American, rather than an expatriate, pointing to James’s  praise of Lincoln, and quoting Edith Wharton’s having said “that James used to read Walt Whitman aloud ‘in a mood of subdued ecstasy’ and with tremendous effect on his hearers“.  Wilson divides up the cultural terrain of America between the end of the Civil War and its very late 19th century situation.  Wilson compares the first part of the period with recent history of the Soviet Union, America now presenting the world with a “new humanity, set free from the caste-barriers and overtones of Europe, which should return to the mother-country only to plunder her for  elements  of culture which might contribute to the movement at home; and how, with the triumph of the industrial system, the persons who were occupied with art and thought became gradually ashamed of the United States and tended to take refuge in Europe. Henry James belonged to this second phase, but he had a good deal of the idealism of the first one. ”

Wilson then turns the argument towards the complexity that James  captures at the start of the 20th century. “James shows us all that was magnanimous, reviving, and human in the Americans at the beginning  of the new century along with all that was frustrated, sterile, excessively refined, depressing.”  He uses the example of Milly Theale as this kind of character: “The rich New Yorker.”  He next compares James’s style with John Singer Sargent’s” It is the great period of Sargent; but compare these figures of Henry James’s with Sargent’s and see what profounder insight with what profounder  insight as well as with what superior delicacy James has caught the rich Americans of this race.” 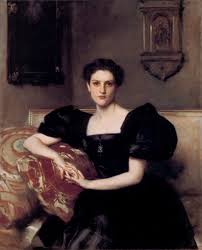 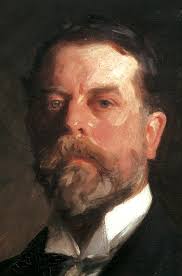 I wouldn’t have said that of “Madame X”

But Wilson’s point is by this time “The Americans have become very rich, and in becoming that, they have starved themselves spiritually.” Thus we find ourselves in a  novel that reports  instead of analysing the troubled riches of capitalist America.  As Wilson writes: “James is a reporter, not a seer.”  This is a marxist, but not Marx’s,  analysis. ” It seems foolish to me to reproach James for neglecting the industrial background.”

Wilson suggests that James changes with the times, and in response to what he has shown about the wealthy Americans. “The old Balzac in James revives.”  and James enters into “a new kind of realism. The fiction of his latest period is preoccupied in a curious way with the ugly,the poor and the old . It is perhaps the reflection of his own old age, his own lack of worldly success, the strange creature that he himself has become”  His last stories  are about “the sordid lives of journalists in London,”  the last piece of fiction he published, “The Bench of Desolation,” “is a sort of poem of loneliness and poverty among the nondescript small shopkeepers and former governessess of an English seaside resort.”

James finds himself facing the corruption and vulgarity of the newly rich in Newport Rhode Island, and he returns to England and becomes an English Citizen, appalled by the lack of support in the United States for the  British War effort.

Wilson ends with the case of Hyacinth Robinson, the anti-hero of The Princess Cassimassima who kills himself just when he is about to take on a dangerous assignment for the revolutionaries. “But as Hyacinth Robinson died of the class struggle, Henry James died of the War.”

There will be more James in Partisan Review over many decades. And I may have a few things to say about growing up in a household in which we said, “Henry James saved our Mother’s Life,” and where messages and invitations and photos of ‘The Master’ and so many of his books from Lamb House provided the magic medicine that brought my mother out of the darkened bedroom into the light of the life of the mind. If you go to the Berg Collection in the NY Public Library, you can order up volumes of novels that James owned and was influenced by and borrowed from to make his modern structures, and find her donation of volumes of James’s personal library, with her name on the bookplate. She was a proper New Yorker, Our Ma.