We turn and return to Delmore Schwartz  after Gide– ‘The Ballad of the Children of the Czar,’ was Delmore’s second piece for Partisan Review — and thematically it belongs to the Russian-American links between the ‘old country’ — the ‘alter heim’ and the new.  The elegance and elevated style of Gide’s analysis and criticism of the USSR is followed by Schwartz’s comparison between the children of the Czar and the child who throws his potato (poverty food) on the floor in New York City. Contemporaries and living in two versions of time. Siblings and on other sides of the class line.  The poem is set in 1917 and 1918, the years of the Russian Revolution. 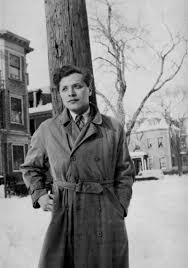 Schwartz wrote the poem during the period that he was becoming fast friends with the poet John Berryman. 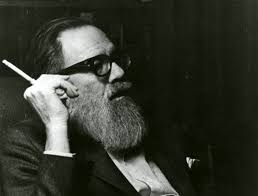 They remained friends and readers of each other’s work until their deaths. After Schwartz’s death, Berryman wrote a series of ‘Dream Songs’ that elegise Delmore and that are among the greatest tributes written to him.

The Tsar and his family had been executed 0n 17 July, 1917, by the Bolsheviks who held them in Yekaterinburg to prevent them from being rescued by counter-revolutionary forces. 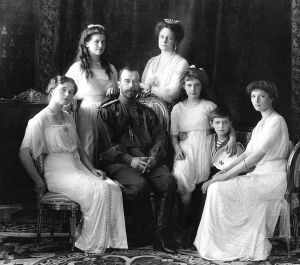 The first part of that poem plays with the associations of their lives and their deaths: playing, the innocence of whiteness, the White Army of those fighting against the Bolsheviks, the face of the Tsar, who knows their fates, while the children are both aware and unaware,  mingled with the moon: ‘bald white/like Papa’s face.’  The second part takes place in Brooklyn, where Delmore as a small child eats a potato — a misshapen ball. The Arrow Collar Ad alludes to President FDR’s admiration for the all-American men who posed for the Arrow Shirt Company’s ads. Roosevelt  said that the “Arrow Man” was “a superb portrait of the common man.” 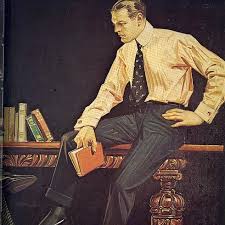 Another kind of irrationality, we see, by looking at some of those ads! And the man who flees the Tzar, Delmore’s grandfather, and comes to America certainly isn’t an Arrow Man, but his fantasy is just as irrational,  “To be a king himself.” The poem moves on to the destructions of history, and the legacies that must be borne from generation to generation.  A great reader of Yeats, Delmore alludes to Yeats’ poem of generational inheritance, ‘Leda and the Swan’: “A shudder in the loins engenders there/The broken wall, the burning roof and power, and Agamemnon dead.”  The next part elaborates this as the Bolshevik Revolution of October 1917 breaks into the life of the children, and turns them against each other,

The children of the Czar
Played with a bouncing ball

In the May morning, in the Czar’s garden,
Tossing it back and forth.

It fell among the flowerbeds
Or fled to the north gate.

A daylight moon hung up
In the Western sky, bald white.

Like Papa’s face, said Sister,
Hurling the white ball forth.
2

While I ate a baked potato
Six thousand miles apart,

When Franklin D. Roosevelt
Was an Arrow Collar ad.

O Nicholas! Alas! Alas!
My grandfather coughed in your army,

Hid in a wine-stinking barrel,
For three days in Bucharest

Then left for America
To become a king himself.
3

I am my father’s father,
You are your children’s guilt.

In history’s pity and terror
The child is Aeneas again;

Troy is in the nursery,
The rocking horse is on fire.

Child labor! The child must carry
His fathers on his back.

For the individual,
Who drinks tea, who catches cold,

Let anger be general:
I hate an abstract thing.
4

The shattering sun fell down
Like swords upon their play,

Moving eastward among the stars
Toward February and October.

But the Maywind brushed their cheeks
Like a mother watching sleep,

And if for a moment they fight
Over the bouncing ball

And sister pinches brother
And brother kicks her shins,

Well! The heart of man is known:
It is a cactus bloom.
5

The ground on which the ball bounces
Is another bouncing ball.

The wheeling, whirling world
Makes no will glad.

Spinning in its spotlight darkness,
It is too big for their hands.

Made for no play, for no children,
But chasing only itself.

The innocent are overtaken,
They are not innocent.

They are their father’s fathers,
The past is inevitable.
6

Now, in another October
Of this tragic star,

I see my second year,
I eat my baked potato.

It is my buttered world,
But, poked by my unlearned hand,

It falls from the highchair down
And I begin to howl.

And I see the ball roll under
The iron gate which is locked.

Sister is screaming, brother is howling,
The ball has evaded their will.

Even a bouncing ball
Is uncontrollable,

And is under the garden wall.
I am overtaken by terror

Thinking of my father’s fathers,
And of my own will.

The poem was welcomed by other writers, and it had some of the same renown as “In Dreams Begin Responsibilities,” that had opened the first issue of the new Partisan Review.

Later,  in 1949 Delmore wrote in his journal about a party held by  the wealthy poet, Hy Sobiloff, at  which he “kept talking about Czar poem and how I was a great man.  Depressed because of days and days of drinking.” The link is characteristic of Delmore. The praise raises his sense of his inadequacy as a poet; the drinking feeds it. This will become the refrain in his personal journals.

appendix: There are reverberations between Schwartz’s poem and John Berryman’s ‘The Ball Poem,’ which was published in 1942 by James Laughlin’s New Directions Press — a press that underwrote the careers of many Modernist poets, including Ezra Pound and William Carlos Williams and Schwartz.  It was Schwartz who promoted and encouraged Berryman.

The Ball Poem
BY JOHN BERRYMAN
What is the boy now, who has lost his ball.
What, what is he to do? I saw it go
Merrily bouncing, down the street, and then
Merrily over—there it is in the water!
No use to say ‘O there are other balls’:
An ultimate shaking grief fixes the boy
As he stands rigid, trembling, staring down
All his young days into the harbour where
His ball went. I would not intrude on him,
A dime, another ball, is worthless. Now
He senses first responsibility
In a world of possessions. People will take balls,
Balls will be lost always, little boy,
And no one buys a ball back. Money is external.
He is learning, well behind his desperate eyes,
The epistemology of loss, how to stand up
Knowing what every man must one day know
And most know many days, how to stand up
And gradually light returns to the street,
A whistle blows, the ball is out of sight.
Soon part of me will explore the deep and dark
Floor of the harbour . . I am everywhere,
I suffer and move, my mind and my heart move
With all that move me, under the water
Or whistling, I am not a little boy.