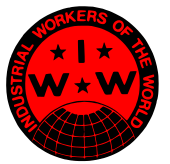 “The Migratory Worker,” a short story by John Dos Passos is the next piece in the January, 1938 issue of PR.  Its a naturalist portrait of the fall of a man in Depression America, and it reminds the reader that PR isn’t all theory and cosmopolitan high culture.  Set in Arizona, the narrative is of a young man without many skills, but some experience of the clap, freight train riding, and what he thinks of as ‘easy women.’.  He has been doing unskilled ‘pick and shovel’ work, but a second dose of the clap sends him to buy a ticket to Phoenix where a ‘part-Indian’ doctor is rumoured to provide a cure.  Ike Hall is  strong and confident, eager to learn, and he finds a job which can train him in electrics. He is a member of the IWW, founded in 1905 — The International Workers of the World — an American union, “One Big Union”–, known as the known as the”Wobblies,” and he feels the pride and the power of being in employment. The Wobblies were linked to the politics of socialism and anarcho-syndicalism. Committed to an inclusive membership, it welcomed people of all races, both sexes, and promoted the slogan; “An injury to one is an injury to all.”

While learning the electrical trade, Ike meets Jinny Connor, who is young and pretty and ‘thinks the world of him.’ Her family objects to a marriage between them, which forces the young couple to leave Phoenix, and go to Kansas City.  But Ike’s luck turns, and “The electrical workers local wasn’t taking in any new members on account of the slump and before Ike could say Jack Robinson there he was smashing baggage at the Railway Express and Jinny was counter girl in a onearmed lunch”. 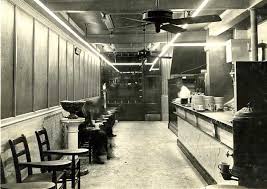 one armed lunch room — like the place where Jinny worked.

The shades of the prison house start closing in around the young couple, they sleep in the cold at night, and “There wasn’t a living soul they could call on for help.”    Ike, in despair, has to sign on for a job that will take them to Oklahoma so he can work in the oilfields.  It means that he has to turn in his “red card,”his IWW membership card, and he becomes what they called a ‘scissorbill,’ a union busting scab.

“The train made a cheery racket over the ties in the night. Now and then from way up ahead the engine hooted at him: ‘Just a lousy scabbin’ scissorbill.'”

Joe Hill, one of the heroes of the IWW wrote this song about the scab:

“You may ramble ’round the country anywhere you will,
You’ll always run across the same old Scissor Bill.
He’s found upon the desert, he is on the hill,
He’s found in every mining camp and lumber mill.
He looks just like a human, he can eat and walk,
But you will find he isn’t, when he starts to talk.
He’ll say, “This is my country,” with an honest face,
While all the cops they chase him out of every place.
CHORUS
Scissor Bill, he is a little dippy,
Scissor Bill, he has a funny face.
Scissor Bill should drown in Mississippi,
He is the missing link that Darwin tried to trace.
And Scissor Bill, he couldn’t live without the booze,
He sits around all day and spits tobacco juice.
He takes a deck of cards and tries to beat the Chink!
Yes, Bill would be a smart guy if he only could think.
And Scissor Bill, he says: “This country must be freed
From Niggers, Japs and Dutchmen and the gol durn Swede.”
He says that every cop would be a native son
If it wasn’t for the Irishman, the sonna fur gun.
CHORUS
Scissor Bill, the “foreigners” is cussin’;
Scissor Bill, he says: “I hate a Coon”;
Scissor Bill is down on everybody
The Hottentots, the bushmen and the man in the moon.”

Dos Passos’s story  belonges  to the genre of ‘proletarian literature,’ which sometimes means literature written by the working class, and sometimes means literature about the working class, written with a pro-socialist or communist politics. It was the stuff of socialist and  CPUSA periodicals from the founding of the CPUSA in 1919, and became an official ‘line’ of the CPUSA in Third Period Communism, and through the Popular Front.  The New Masses, one of the most popular of the CPUSA-related periodicals, published many ‘proletarian’ stories and poems.

I first read Dos Passos’ wonderful trilogy, USA,  when I was taking a graduate course in 1930s literature. It is a long and exciting set of three novels, and in them Dos Passos not only writes against Capitalism, he draws on the avant-garde and mass cultural structures: he includes a set of inter-chapters  which  offer  newspaper headlines, jingles from commercials, songs, etc.  It is a engaging novel and I recommend it to any one interested in the 1930s and the Left in the USA. Mary McCarthy, in How I Grew, read a Dos Passos novel in a course at Vassar, and followed it up with his pamphlet about Sacco and Vanzetti, “which turned me around politically from one day to the next (or so it seemed). There was no more talk from me about Royalism [aj:!!]
Mary McCarthy’s second husband, Edmund Wilson, was a friend of Dos Passos, and they were neighbours on Cape Cod.

As for Dos Passos himself, he was one of those whose defection from the CPUSA became a defection from the Trotskyist Left and then the Left altogether. He was born into a upper middle class family, was sent to Choate for boarding school, and then went on to Harvard. Like many of his generation, he became an advocate for communism and was involved with communist inspired literary conferences throughout the 1930s.His experience in the Spanish Civil War led him to give up on the Communist Movement. Like his friends at Partisan Review, DosPassos had listened carefully to the news about Stalin, and he  signed on to the Defence of Trotsky Committee.  But he was moving to the Right, and by the mid-1940s, he was on the Right. The death of his wife in 1947  was a devastating event for him, and though he wrote many many books , he withdrew from much of public life in the late 40s and 1950s, only to emerge as an advocate for conservative politics and political candidates in the 1960s.

As you have seen,however, Partisan Review was sparing in its publication of ‘proletarian literature,’ and the shock of the story’s intensity and depth of feeling when read against the more restrained and analytical pieces in the journal is both exhilarating and odd.

next: Andre Gide on the Soviet Union.