The Partisan Review – Vassar College connection begins with and will return to Mary McCarthy, the most vibrant and social of the Vasser group — young women who were, if not exactly those who appeared in McCarthy’s popular novel, The Group, in 1963, at least something like them.  So, for example, after the end of the affair between McCarthy and Philip Rahv, he married  Nathalie Swan, the model for the Group’s Lakey, the posh, aloof one; the one who finally finds her life and love in Paris.

But it was another Vassar friend, Elizabeth Bishop who hopped off a boat in Brazil and fell in love with 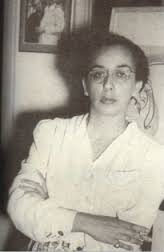 Carlota Costallat de Macedo Soares (“Lota”) in 1951, and with whom she lived for 16 years.

And in this second issue of PR, an issue that relaxes some of its political stringency to let Modernism in poetry and art stand alone, Elizabeth Bishop, who remains one of the most admired of the American ‘middle generation,’ offers a poem about the city at dawn, and the motor that moves us from nature to culture.  The term ‘middle generation’ refers to those poets more or less a generation younger than Ezra Pound and T.S. Eliot and Marianne Moore, who took the abstraction of modernist poetics and hammered it against their own experiences —  the genre of ‘confessional poetry.’  These younger poets,  including Robert Lowell, Sylvia Plath, and Anne Sexton, saw a fellow-artist in  Bishop, and she sustained a long and important friendship and correspondence with Robert Lowell, who was married for many years to Elizabeth Hardwick, a contributor to Partisan Review and in 1967, a co-founder of The New York Review of Books, which still is one of the urban intellegentsia’s most valued journals.

Bishop and McCarthy became friends at Vassar in 1932:  in an interview with the Paris Review published in 1981, a few years after her death,  Bishop said,

“We started a magazine you may have heard of, Con Spirito. I think I was a junior then. There were six or seven of us—Mary, Eleanor Clark and her older sister, my friends Margaret Miller and Frani Blough, and a couple of others. It was during Prohibition and we used to go downtown to a speakeasy and drink wine out of teacups. Most of us had submitted things to the Vassar Review and they’d been turned down. It was very old-fashioned then. We were all rather put out because we thought we were good. So we thought, Well, we’ll start our own magazine. We thought it would be nice to have it anonymous, which it was”.

Although the 1930s was the decade of literary-political arguments, Bishop didn’t see herself as part of the New York Left:

“Everybody was frantic trying to get jobs. All the intellectuals were communist except me. I’m always very perverse so I went in for T. S. Eliot and Anglo-Catholicism. But the spirit was pretty radical.”

And that spirit, not given as a position, but rather as a mosaic of observations, is displayed in the poem she contributed to this issue:  like other city poems, such as Wordsworth’s “Composed upon Westminster Bridge, 1802,” Bishop’s poem takes the city at dawn and uses its opening calm to build up a full picture of the encounter between the sky and the urban terrain and its human hazards.

Earliest morning, switching all the tracks
That cross the sky from cinder star to star,
Coupling the ends of streets
To trains of light,

Now draw us into daylight in our beds;
And clear away what presses on the brain:
Put out the neon shapes
That float and swell and glare

Down the gray avenue between the eyes
In pinks and yellows, letters and twitching signs.
Hang-over moons, wane, wane!
From the window I see

An immense city, carefully revealed,
Made delicate by over-workmanship,
Detail upon detail,
Cornice upon facade,

Reaching up so languidly up into
A weak white sky, it seems to waver there.
(Where it has slowly grown
In skies of water-glass

From fused beads of iron and copper crystals,
The little chemical “garden” in a jar
Trembles and stands again,
Pale blue, blue-green, and brick.)

The sparrows hurriedly begin their play.
Then, in the West, “Boom!” and a cloud of smoke.
“Boom!” and the exploding ball
Of blossom blooms again.

(And all the employees who work in a plants
Where such a sound says “Danger,” or once said “Death,”
Turn in their sleep and feel
The short hairs bristling

On backs of necks.) The cloud of smoke moves off.
A shirt is taken off a threadlike clothes-line.
Along the street below
The water-wagon comes

Throwing its hissing, snowy fan across
Peelings and newspapers. The water dries
Light-dry, dark-wet, the pattern
Of the cool water-melon.

I hear the day-springs of the morning strike
From stony walls and halls and iron beds,
Scattered or grouped cascades,
Alarms for the expected:

Queer cupids of all persons getting up,
Whose evening meal they will prepare all day,
You will dine well
On his heart, on his, and his,

So send them about your business affectionately,
Dragging in the streets their unique loves.
Scourge them with roses only,
Be light as helium,

For always to one, or several, morning comes
Whose head has fallen over the edge of his bed,
Whose face is turned
So that the image of

The city grows down into his open eyes
Inverted and distorted. No. I mean
Distorted and revealed,
If he sees it at all.