James Agee was a literary friend of Dwight MacDonald and of Delmore Schwartz, and  for a time he was with, but not wholly of, Partisan Review. 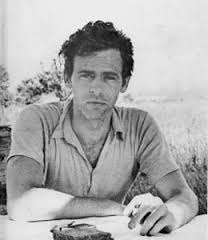 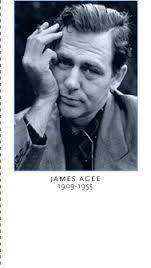 Agee was born in Knoxville, Tennessee in 1909, where his father died when James was 6.  Under the guidance of his Episcopalian mother and a teacher, Father James Harold Flyte, who taught him at an  Episcopalian boarding school in the South,  James came north as a teenager to be educated, first at Philips Exeter Academy, an elite boarding school on the East Coast, (where Dwight MacDonald had been just a few years earlier), then on to Harvard. James excelled in English and wrote prodigiously, and was elevated into the poetry elite in 1934, when his collection of verse — Permit me Voyage– was published as part of the Yale Younger Poets series.

Its title, I presume, comes from Hart Crane’s poem sequence, “Voyages,” which ends “Permit me voyage, love, into your hands . .” and by taking on the words of Crane, who had died in 1932, Agee set up the scaffolding for his own passionate and confusing life.

The “Lyrics” that appear in the December 1937 issue of PR were probably solicited by Macdonald, who had become friends with Agee and who had helped him get a job working at Fortune and then at Time magazine. In 1937, Agee was sent on assignment to document the lives of the  sharecropping families in the South.  He went with the photographer Walker Evans; the book that Agee wrote (though Fortune rejected the original commissioned article)  along with Evans’s photos is now considered one of the most brilliant narratives of life during the American Depression of the 1930s, and a precursor to the New Journalism of Hunter Thomson and Norman Mailer.  It was published as Let Us Now Praise Famous Men in 1941 to little acclaim and poor sales. The “Lyrics” published at the end of 1937 may be a coda to or reflections on that trip.

In a notebook entry  by Delmore Schwartz a few years before Agee’s death at 45 from a heart attack, the poet writes: “Agee:the world well-lost for loving description & bohemian Xtiase [aj: Christianise ] piety.” Most of the many who have written about Agee’s appeal, his love of language, his love of drinking, his difficulty working, his laziness and his ‘genius,’ as a kind of poet maudit, kin to Schwartz, but with more élan and more energy.

“I am a Communist by sympathy and conviction,”  Agee announced, but he was also an unresolved Episcopalian, dogged by strictures of“the mortal sin of ‘pride.’ Agee takes his discussion of pride and heaves it over to the Soviet Union, combining his disdain for the Stalinist elites of art and industry with his sense of sin. He writes:

“The most dangerous form of pride is neither arrogance nor humility, but its mild, common denominator form, complacency. Artists, for instance,should be capable of figuring the situation out to the degree that they would refuse the social eminence and the high pay they are given in Soviet Russia. The setting up of an aristocracy of superior workers is no good sign, either.”

The Lyrics printed on pages 41-44 of issue 1, dec 1937, are, indeed,  lyrical and Whitmanian, Yeatsian, and Blakean, and they are political, with reverberations of W.H. Auden’s crisp metaphors covered with a haze of  Biblical transcendence .  Here is the first of the 11 “Lyrics” :

Remembering thunder: deliberating in the shadow cold; the fuse air:

In his essay of 1962, Dwight Macdonald declared that like the cult of James Dean,

“There is an Agee Cult that has come into existence because of the power of his writing and his lack of recognition while he was alive, but chiefly because it is felt that Agee’s life and personality, like Dean’s, are at once an expression of our time and a protest against it. It is also felt that it was not their weakness which betrayed them, but their vitality. In their maimed careers and their wasteful deaths, the writer and the actor appeal to a resentment that intellectuals and teenagers alike feel about life in America to-day, so sleekly prosperous on the surface, so frustrating in the depths.”

By the time I went to Reed College in 1970, Let Us Now Praise Famous Men, which had sold only 600 copies when it was first published in 1941, had been republished and become the ubiquitouspaperback on my campus. I expect that if you are reading this post, you have also either read Agee’s ruminations during the Depression, or seen the Walker Evans photos.

The New Left embraced Agee’s energy and anger, and the Walker Evans photos gave us a new post-hippie fashion for

poverty-beauty. Wraithlike young women with stray hair tucked behind their ears and the abject gaze of the truly hungry were quickly translated into the images of the post-68ers as faux Appalachians.

in 1983, William Barrett published The Truants: Adventures Among the Intellectuals, and in it he provided some discussion of why someone like Agee would keep his distance from the PR circle:  noting first that “the sheer intensity of the group itself could be enough to drain one’s energies –especially away from writing…Besides, there was a danger for creative writers particularly in becoming too deeply involved in a circle were every item of experience was intellectualized. James Agee felt this chill and withdrew.”

Barrett describes the friendship that developed between Agee and Schwartz in 1939.”I thought at the time that here were the two best literary talents of their generation. . .That afternoon they talked as poets together, without inhibition and without artificiality.  . .But when Delmore became intricately involved with Partisan Review, the friendship faded out. Agee felt the close-knit atmosphere of the New York Intellectuals as an alien  one and did not wish to get too near it.”