Fandango of lettuces pickled fish of swords of cuttlefish of ill-omen disarm of hairs of tonsures standing in the middle of the frying -pan in balls on the wafer of the sherbet of the fried codfish in the mange of his heart of ox — his belly full of the jelly of bedbugs of his words– little bells of the plate of snails braiding intestines– from The Dream and Lie of Franco, 1937.

In the 21st century, Picasso’s Guernica remains a defining image of the horrors of war. Painted in grey-scale in 1937 for the Paris International Exhibition, Guernica articulated the suffering of the Basque country during the Spanish Civil War, when German planes aided Franco’s forces to destroy the democratic government.  When Guernica was shown in Paris, Antony Blunt, the British Art Historian and one of the ‘Cambridge spies’ criticised it from a strictly CP perspective:  Nigel Wheale writes that

“In a Spectator article, ‘Picasso Unfrocked’,(8 October, 1937) Blunt had denounced Guernica as too obscure and self-referential, and its reliance on the worn-out Cubist idiom frankly ‘elitist’. Against Picasso’s formalism, Blunt went on to champion the work of Mexican social realist Diego Rivera.” (Nigel Wheale, The Fortnightly Review, 3 March, 2013)

An important member of the Art World, Keeper of the Queen’s Pictures, and an agent for the Soviet Union, Blunt was a friend and relative of the Windsors, and the Royal Family may have fallen in line with Stalin’s views of art through Blunt’s encouragement though perhaps without knowing it.

The surrealists, rather than the Stalinists, were more engaged by Guernica’s symbolism and  vision and the anarcho-surrealist tone that suffuses the  painting.  It makes sense that the PR editors would want to include Picasso within their range of ‘independent’ but revolutionary culture. In the  1937 December issue of PR, an example of Picasso’s political art occupied three pages of the journal. First is a prose poem whose violent language and savage metaphors detailing the reality of war experience is presented without editorial introduction,  and  on the following two pages are 4 of 18 images that Picasso had published earlier in the year with the title The Dream and Lie of Franco. 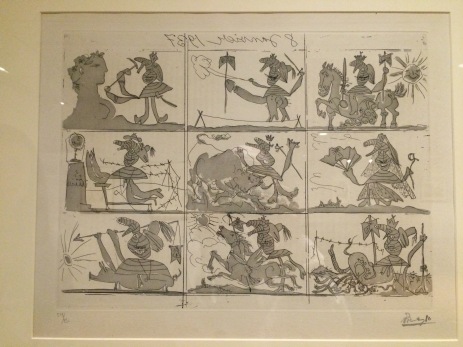 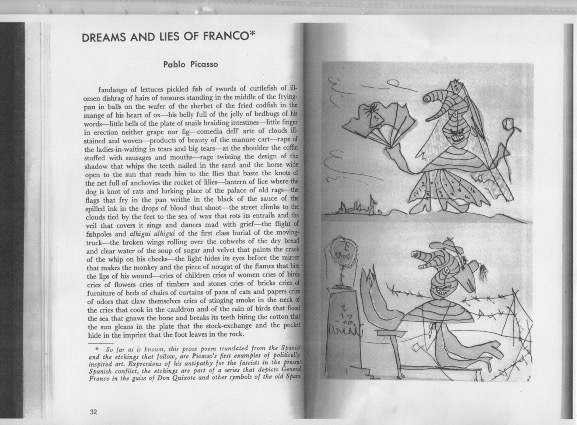 The etching  at the top of  the page above is Franco in the dress of a street walker or courtesan; the one below shows Franco, his hands in prayer, surrounded by barbed wire. On the page below is Franco attacking an ancient monument of beauty; below it is a horse caressing a wounded or dead fighter.The silent chaos of syntax and image which binds poem to etchings is almost a moment of agit-prop, in which The Editors of Partisan Review stand back from commentary and let the poem and pictures overtake commentary’s function.

THE POET BY DAY