If you are new to this blog, please click on the ABOUT tab above to learn about what I am aiming to do in this commentary on Partisan Review in the 1930s. Annie J 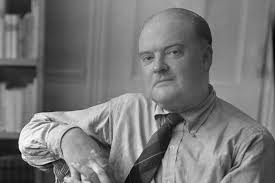 After Schwartz’s story and Stevens’s poem — one from a newcomer, the other from a distinguished man of letters — PR turns to the kind of political literary criticism that would be critical and historical.   The essay, “Flaubert’s Politics” is a tour de force by the decade’s most highly regarded American critic, Edmund Wilson, who made his name in the 1920s and 1930s, and who championed the work of F.Scott Fitzgerald. In 1938 he married Mary McCarthy, who at that time was  having a serious relationship with Philip Rahv of PR. In her  Intellectual Memoirs, McCarthy explains how Wilson came to contribute to the first issue of the new PR.  The  Stalinist purges of Old Bolsheviks had begun and Philip Rahv was clear that the journal would polemicise against this turn within the Soviet Union. Wilson had come to the PR office to meet with the editors, and McCarthy, always well-dressed, was particularly so that day, ‘to make a good impression’.  “He bustled into our office, short, stout, middle-aged, breathy — born 1895; we others were in our twenties…”

As an elder literary statesman, Wilson agreed to contribute an article, and in it he proved that Flaubert was a anti-Stalinist Marxist avant la lettre and of Marx’s party without knowing it. Wilson had published a version of it in 1932 in the Herald Tribune Book Review, but its importance in the first issue of PR was not only because of the crisis caused by the Moscow Show Trials in 1936 and 1938, but also because it modelled  the new kind of critical thought that Partisan Review endorsed.

Wilson begins with the  complexity of politics in France during Flaubert’s life (1820-1881), a period ‘of alternating republics and monarchies, of bogus emperors and defeated  revolutions, when political ideas were in confusion’. Flaubert agrees with the Goncourt brothers that the only response is to stay away from ‘any social conviction,’to remove oneself from the fray. The Revolution of 1848 had appalled Flaubert, and he shied away from what he felt were the manacles of political attachment, in particular ‘the authoritarianism’ of the socialists.  “Nothing exasperated him more  — and we may sympathise with him today– than the idea that the soul is to be saved by the profession of correct opinions.” And so may we sympathize with him today.

But then Wilson pivots away from Flaubert’s opinions and suggests that the novelist was an idealist in tradition of Hegelian”Idea”, as was Marx (up to a point) and opening the second, and central movement of the article.  Wilson acknowledges that when Flaubert ‘reasons about society — which he never does except in his letters — his conceptions seem incoherent.’ But his deeper commitments are apparent within his novels. So Wilson  points out scenes in  which  Flaubert locates moral value in the working class and rural labouring class- and that  brings him closer to Marx. In ‘L’Education Sentimentale’ Flaubert  recognises the enemy as the bourgeois, and the putative ‘hero’ of he novel is as ineffectual as the bourgeois men he detests. Senecal, the communist, when he gets work in a pottery, becomes ‘an inexorable little tyrant,’ and an authoritarian.  HIs counterpart,the dull but honest clerk, Dessardier, becomes a member of the National Guard, and knocks down a young revolutionary.Immediately rebuking himself, he spontaneously joins the working men in the street. He is then killed by a policeman, who turns out to be Senecal.

“Today we must recognise that Flaubert had observed something of which Marx was not aware.  We have had the opportunity to see how even a socialism which has come to power as the result of a proletarian has bred a political police of almost unprecedented ruthlessness and pervasiveness — how the socialism of Marx himself, with its emphasis on dictatorship rather than on democratic processes, has contributed to produce this disaster. Here Flaubert, who believed that the artist should aim to be without social convictions, has been able to judge the tendencies of political doctrines as the greatest of doctrinaires could not; and here the role chosen by Flaubert is justified.”

Next: Lionel Abel on Ignacio Silone